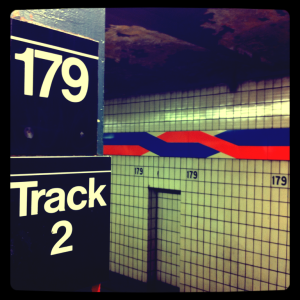 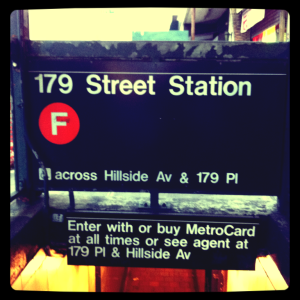 This past Sunday, Bonnie and I had the good fortune to actually make it to our intended destination (Well, not Brighton Beach like we’ve been hinting at for weeks but to Jamaica where we thought we were headed last time). After Sexcamaids practice (the beautiful Bonnie will be dancing in the Mermaid Parade with these sassy tail shakers for the 2nd year in a row), we departed from my house. Our trip was so effortless, and we were so busy catching up on birthdays and bachelorettes, that I dropped the ball on documenting the time of our debarkation. I estimate that we left 14th Street and 6th Avenue around 5:07 and arrived at 179th Street – Jamaica at 5:52. 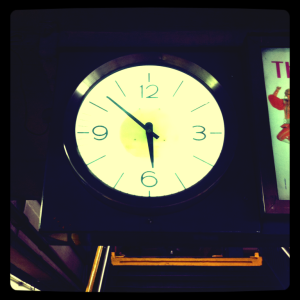 Jamaica is by and large, residential. There is that quietude that permeates whenever there are tree-lined streets, front yards with men trimming the hedges and bright colored tulips planted in boxes. However there weren’t any children.  And there was this grayness that we likened to the kind of place one goes to live with their parents after getting out of rehab. Not to mention it felt like we were being watched the whole time.  Away from the residential pockets, the streets are wide and filled with the barbers, dentists and 99 cent stores we have come to expect, as well as some things we did not….

In the midst of our hunt for food, we happened upon a “famous actor/professional juggler”. At least that’s what his buddy, an aggressive and bellowing man sporting an MTA shirt and perched under the hatchback of his mini-van, proclaimed. We were unable to substantiate the “famous actor” part. But we were informed that this man had extensive experience juggling jobs and women. And, oh wait sir, and what else do you juggle?

Famous actor/professional horse juggler? You don’t come across that every day! Prompted by the MTA employee, Bonnie gave the horse juggler a dollar. Apparently it is not such a lucrative career. 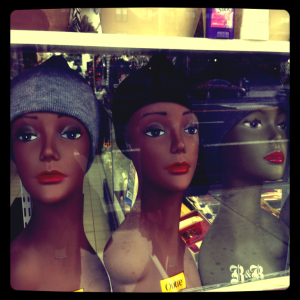 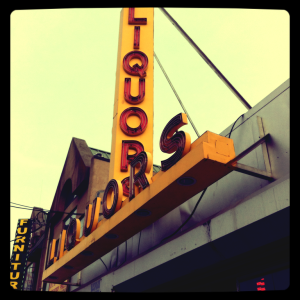 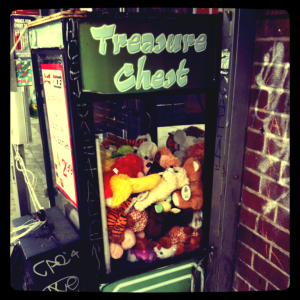 As we crossed the street, MTA man was so kind (read: insinuating and obnoxious) as to tell us that we were not in Kansas anymore. Well, I have never been to Kansas (except perhaps on a quick drive through), but I certainly had no illusions that Jamaica Queens would be anything like it. I did however expect there to be RESTAURANTS in the far reachings of Jamaica Queens. Although feeling a bit shy, we decided it would be best to ask the locals. Where was the good food to be had? There must be some street we had missed that was full of delicious eating establishments, right?

One man told us we needed to get on a bus and go FOUR MILES down the thoroughfare. Another told us that we should check our food first for cleanliness if we did decide to eat in the neighborhood. All seemed to be concerned about our ability to handle spicy food. What? Doesn’t this lady on the left look like she likes things a lil hot sometimes? Geez. 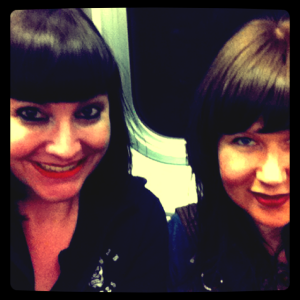 Feeling a bit deflated, Bonnie and I decided to walk a bit more before calling it a day at the White Castle.

That was when we spied a Peruvian restaurant sign from across the street, and then an A grade from the health department in the window and we knew we had hit jackpot. We hadn’t traveled four miles, there was an indicator of cleanliness and maybe we could get something SPICY.

The Restaurant is called “Rocoto”, and we were greeted warmly by a lovely woman (who we later learned is named Jenny). “I have not seen you around the neighborhood before” No, not us – first time off this stop. See? They’re watching us! 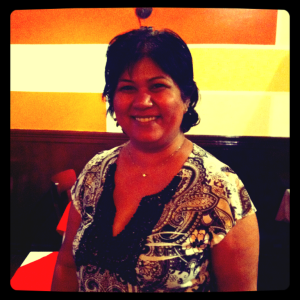 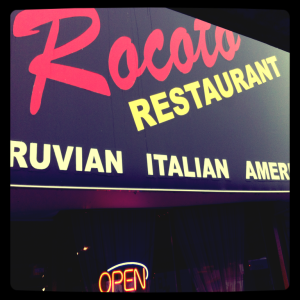 Jenny was eager to tell us about Peruvian food and make recommendations on their traditional dishes. She comes from Trinidad, but married a Peruvian man – who we met and was equally lovely – and spent time there. The restaurant has been open now for 4 months (so you can forgive the people we asked on the street for not recommending the place straight away). There were bongo drums in the corner for live music on Saturdays and a warm atmosphere – principally created by the owners and their family.

“If you don’t see what you want, please ask”. – That was printed on the menu. I have had meals at many a fancy restaurant and I can tell you without reservation that the service at Rocoto was some of the best I have ever had. Jenny recommended that we share the Tripple “A” – a huge platter of arroz con mariscos (rice with seafood), ceviche (of corvina), jalea (lightly fried shrimp and squid covered in Peruvian salsa) and leche de tigre (a delightfully spicy seafood cocktail). We took her up on that, as well as two glasses of sangria. We felt that it might be a bit of a risk ordering a seafood platter (though Bonnie thinks a bout of food poisoning might make an interesting End of the Line Dining story. Me? Not so much), but it was a risk that paid off. Everything was so delicious, and the sauces they provided were AMAZING! I will very technically call them green sauce, spicy red sauce (this one actually had the same name as the restaurant – Rocoto) and spicy orange sauce (with a hint of cucumber). I could never do justice in describing them so I won’t even try! 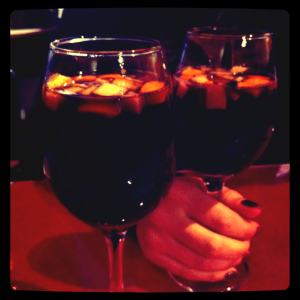 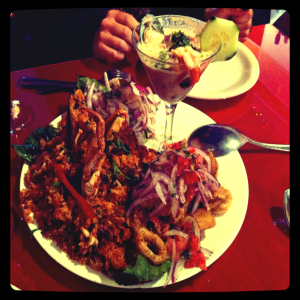 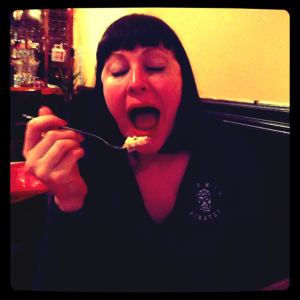 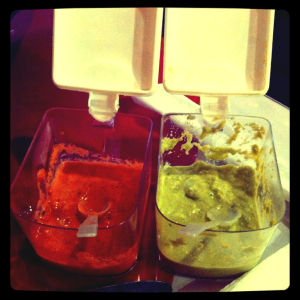 By the end of the meal we were stuffed and had decided against dessert, but Jenny insisted on giving us a complimentary piece flan she had just made. Bless her soul, it was incredible. 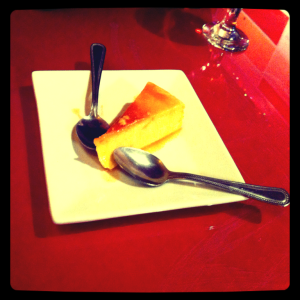 The station was right in front of the restaurant and we boarded the train home, reflecting upon how one genuinely nice person can change your entire experience. Delicious food doesn’t hurt either!

See you in 2 weeks at the last stop…. 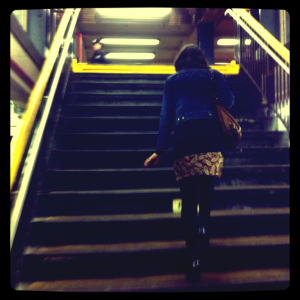 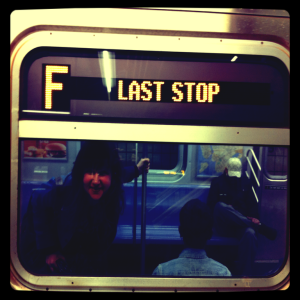