F is for: Friends, Ferris Wheels and Free-lovin’ 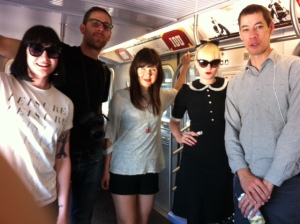 Beware! Contained within this blog post is a close examination of that crazy phenomenon of LOVE. Let’s face it: spring is in the air and slow-cooking us for those sizzly summer nights, when sweat and skin are on everyone’s minds. I found myself on an adventure to Coney Island last Sunday afternoon with four old pals, each in our own degree of love—the spectrum from very single to very attached and all that lies in between.

We’ll start with ME: the single-est of the bunch. The boy crazy one that hasn’t been in a relationship in five years. I love to fall in love but I rarely attach myself. Still, I’ve been happy with my flings and love affairs along the way. I’ve been free and addicted to the thrill of the romance. It’s a good spot to be in for now.

Next up is our photographer, Kevin. What a dream boat, don’t you think? I’ve intermittently entertained the idea of having a crush on this one because ummmm, do you have eyes? I even got him to make out with me once in his car in front of my apartment while another friend waited outside in the rain for us to finish. How awesomely 1980s brat pack rom com is that? But our Kevin is fairly recently out of a long relationship, on the healing road. Single but unavailable (makes us want him more, doesn’t it?) So he and I are the singles of the crew, but representing different rankings.

Then there’s Kate Schlichter. Kate is in a NEW RELATIONSHIP! How exciting is the beginning? When you’re still figuring each other out and buzzing with passion and excitement. I love the beginning. People are free. No pain. No ammunition for pain. Just admiration. They are so new to it that I, one of Kate’s best friends, have not even met the object of her affection. He gets to go through the Bones test next weekend though. Looking forward to that. Don’t be nervous. I’m usually pretty nice.

One step up on the romance spectrum is Mathew Falkoff, whom I refer affectionately to as Mateo, or Mat. Mateo is here visiting from China but is an old friend from SF. I fell in love with him on a very close friend level once upon a time in this crazy whirlwind we call life. Not anything serious. But adventures and slumber parties were regular occasions on our agenda back in the day. He used to make me wash my feet before getting into his bed. I’m a little stinkier than he is but that’s why we love each other. He’s now been in a relationship for awhile with a girl that lives in Bangkok. I assume she’s pretty clean and not very stinky. He says she’s a real good girl that keeps him solid.

And maybe we get to a point where solid means everything.

Rounding out the order of things is my girl, Tania. Hers is a relationship spanning many years built on companionship, understanding and respect that’s downright adult if you ask me. And I guess you have since you’re reading my blog.

SO! As I was saying, last Sunday, which also happened to be Mother’s Day, we set out on an adventure.

Five lovebirds flying downtown on the F train. Destination: Coney Island. What a perfect backdrop for my examination of what it’s like to love and how much we want it and need it. We need the roller coaster of it. The over-consumption of sweets and booze of it. The secret kisses on Ferris Wheels of it. (Fun fact: One of the five of us in this group has done a LOT more than kiss on the Wonder Wheel at Coney Island. I’m not saying who!) At amusement parks, we pour quarters into skee ball slots, trying to win giant stuffed animals for our girls. More quarters into Zoltar’s fortune-telling box, crossing our fingers for a lifetime of happiness and true LOVE. And if we’re brave, when the sun goes down, a moonlit skinny dip or a smooch on the empty life guard’s chair. Coney Island is a cesspool for romance of all kinds. And I love it for that. 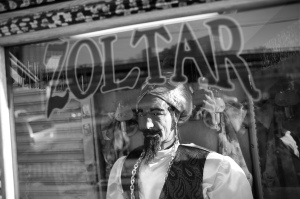 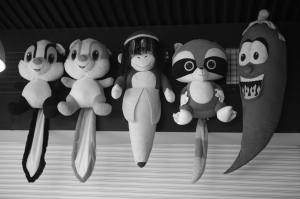 I have so many memories on that boardwalk, which made me excited to go a little deeper into the neighborhood and find a place to eat that was off the beaten track…

We met everyone on the F train platform at 6th Avenue and 14th Street so Tania and I could complete another line (F and R are now done! Top to bottom!) Then set sail at 1:46pm. Five salty sea men, each in love in our own right and each itching for experience. 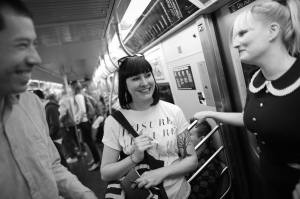 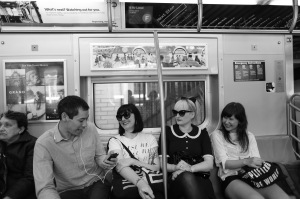 The train ride out is always about catching up and this ride was no exception. How’s life? How’s work? How’s love? I hadn’t seen Mat since January so I spent a good chunk of the ride catching up with him. He likes to joke that coming to NYC is like going on a baby tour. So many babies here. We’re old now. In our (GASP!) thirties which means baby time, apparently. As the train went on, Mat and I were getting pretty graphic, discussing ways in which my gay husband could impregnate me and that’s when we realized we were the only ones on the train besides the sweet older lady sitting next to Mat. And boy was she getting an EARFUL.

But hey! We’re the only ones on the train! Let’s play! Kevin instructed me to lie on the ground (don’t have to ask me twice! I’m the dirty, stinky one, remember?)

Some climbing and revelry ensued… 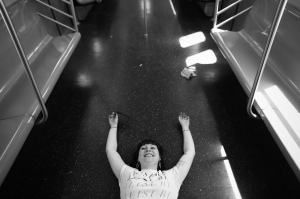 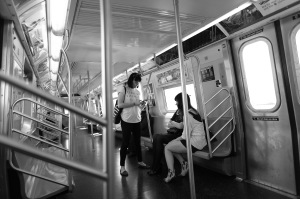 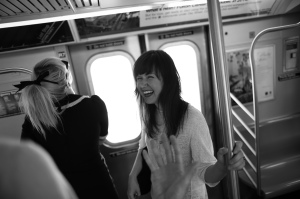 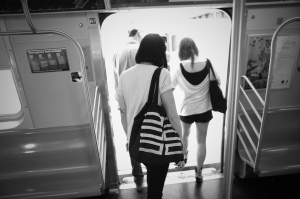 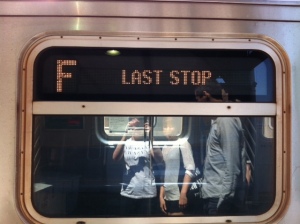 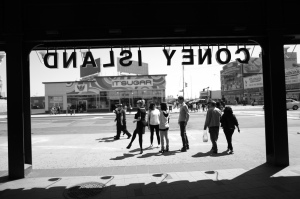 And guess what? We were having too much fun to remember to check our arrival time. But I believe the ride was about 50 minutes.

Then we were loose. The wind was blowing and the possibilities were wide open. I kept asking Kate which direction to turn. Out of the station she commented, “I’ve never gone THAT way” meaning AWAY from the boardwalk.

And so we traipsed. And traveled. And tripped. Laughing and smoking. Winding through the neighborhood that was hit very hard by Hurricane Sandy. And while it has been majorly cleaned up, it’s still spotted with gutted out storefronts and crumbling buildings from the storm’s brutal hand. Mold and mildew smells still waft out of some of the buildings. But the neighborhood is alive. People are out and feeling the spring time air. Sniffing around for love perhaps. 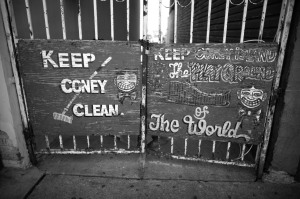 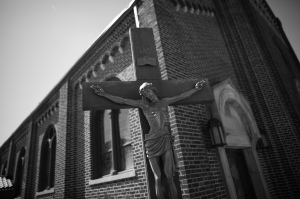 After not much success away from the boardwalk, we headed back toward the water. And there was our oasis on Surf Avenue. 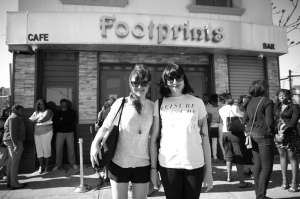 Footprints. A Caribbean restaurant that looked like a strip club from the outside with velvet ropes and all. Kate and I poked inside and with Celine Dion’s “My Heart Will Go On” blaring in our ears (don’t tell me you don’t believe in love after watching TITANIC. I admit it, I’ve seen that movie at least ten times) we decided this was the place. There was an hour wait unless we wanted to sit in a loungey booth with a low table. Which, why not!? We took what we could get and dove into the four pages of cocktail options and the extensive Jamaican/Caribbean food offerings (meanwhile the music switched over to some cool island jams). 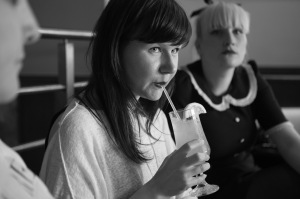 It was a tough choice but here’s what we went with:

Tania and Me: Fish Roti and Jerk Shrimp

Then we asked the server to surprise us with an appetizer or a small plate and she stepped up whole-heartedly to the challenge. She brought us the cod fish cakes with guacamole as well as fried calamari. YUM! 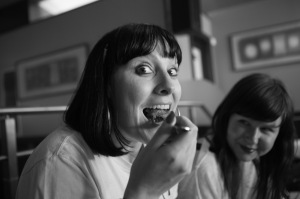 The food came on island time but we weren’t in a rush. The restaurant was packed and we had great company. Everything was delicious and the flavors were vaguely reminiscent of Mexican food. We thought Kate’s Rasta Pasta tasted like nachos and the jerk sauce had a distinct molé flavor. It was all rich and flavorful and except for when I bit into a fish bone and it stabbed the roof of my mouth, I enjoyed every bite. 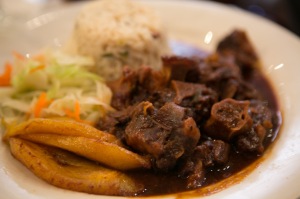 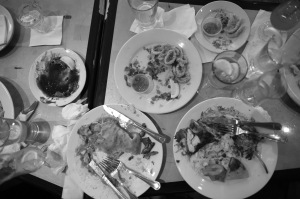 Stuffed and happy, we moved ourselves toward the boardwalk. Lookin’ for action. 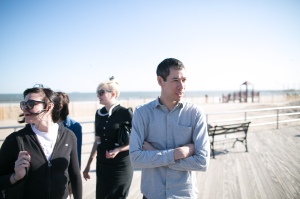 Mat suggested I enter the karaoke contest but it wasn’t the time. Though I do have amazing memories karaoking with Mat in China in the year 2004. Ya heard.

We opted for Skee Ball instead. 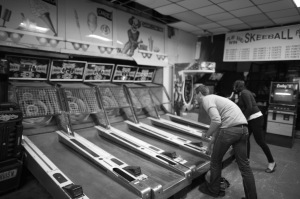 With our tickets, we raked in the following prizes:

I was way into the magic glasses. Though we couldn’t quite figure out where the magic was. Upon further inspection of the packaging, we learned that the glasses were supposed to make you magically smart. I’ll have to test the product further. We never used that whoopee cushion though so watch out if you spot me at a party in the near future. You know I’m going to bust that thing out. 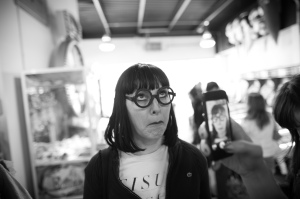 It was a perfect day to be in love. Over-stimulated and stuffed full. I thought about summer and how fun it is to frolic around. To squeeze into a roller coaster seat with that special person and plummet toward certain death together on that old rickety wooden dragon’s back, screaming and laughing at the absurdity of it all because who gives a fuck when you feel so good? 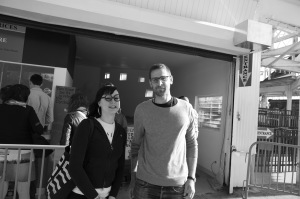 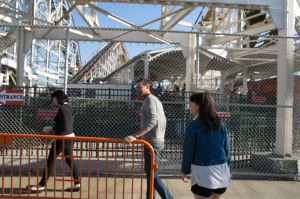 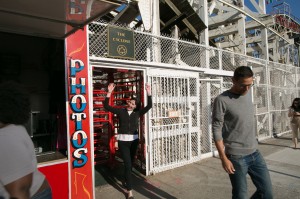 Adrenaline-filled after riding The Cyclone, we decided it was time to head back. And on the train ride home, I sat between two of my best girls, staring across the train car at two of my tallest and most amazing dude friends and I felt swollen with pride and love. Proud of Tania and me for getting this project off the ground and to all the great adventures in store for us. And so deeply in love with my friends.

I want to be in love all the time. I’m in love with this city, with my friends, with the boys I run around with and give secret nicknames to. With the spring time that wakes everyone the fuck up. Even if that leads to breakups and heartache, it opens you up for summer. The freest time there is. 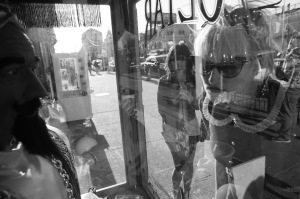 So, to the four other lovebirds that spent a spring Sunday afternoon with me, I send you BIG LOVE!

And especially to Tania. AKA T Bag Stallag. 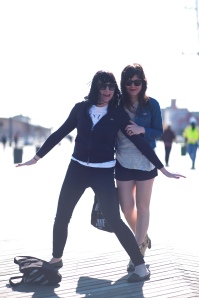 She’s who I rode the roller coaster with, by the way.

Bonus! Check out the interview we did on Heritage Radio at Roberta’s. Within it, Tania and I talk about our project and then Patrick Martin REVEALS the naked waitress! Her first ever public interview 😉 If you keep listening to Steve Jenkins after us, he has a lot of great stuff to say about cheese and olive oil and Fairway Markets. Tania and I chime in here and there. I even make a little naughty joke at the end.