7 is for: Lucky Numbers, Dwarves and Notes in a Major Scale 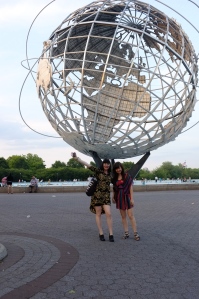 This past weekend marked an important passage of time in my life: one decade in New York City. That’s right, ten years ago, my hubby and I packed it up and headed east. We often reminisce about the moment we first talked about leaving the west coast for the Big Apple. We were on tour with the Ghost Orchids. I was in a little fight with one of my bandmates and so put as much distance as possible between us in the fifteen-passenger van. I believe we had just played Portland, OR, and Christian and I sat in the way back seat, dreaming about what life in New York would be like. A year later, I graduated from college and our plans were set.

Ten years can feel like such a blur, but when I slow down and think of all the moments and people that fill up that space, it feels like magic. How can a momentary idea turn into a decade of memories? That’s almost like asking how can a symphony be a series of individual notes? This project itself started as a momentary idea and now look at where it’s taking us.

Roberta’s started as a momentary idea between friends one day while eating at Frank Pepe’s in New Haven. Not one of the original investors or owners could have imagined where that restaurant would take us. It has brought me so many important people in my life. One of them being Casandra Corrales, who joined us for End of the Line dining last Sunday. She and I waited tables together for a couple of years and recently, she helped me put together a play for my fourth grade students in Queens. She is a bright shining light, that Casandra, with a million dollar smile. Her energy and enthusiasm for life is magical. Her passion and drive are forces to be reckoned with.

Like Tania said in our last post, life gets so busy, doesn’t it? Especially for three energetic and passionate ladies. This past weekend was no exception. Tania had plans on Friday, I had to work at a wedding on Saturday, and on Sunday Casandra’s and my students were performing at Queens Theatre in the Park. How would we fit in End of the Line Dining in there?

Well, Tania would just have to come out and see the show, wouldn’t she? And then we’d go from there. It was the perfect opportunity for a trip on the 7 Train out to Flushing.

Queens Theatre in the Park is located in Flushing Meadows, on the second to last stop on the 7 train. After the performance (which was awesome, thanks for asking!),

we had a leisurely stroll through the park back to the train. It was nice to be outside after a day in the theater with 20 spirited ten-year-olds. Tania brought a nice camera along this time for us to play with and it turns out Casandra’s got some photo skillz! 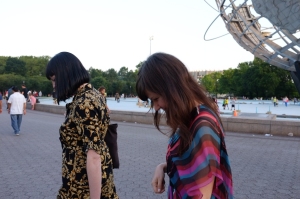 We strolled through the park, hiding our cigarettes from any possible fourth graders that might be heading to the train too. And then boarded from the Willets Point Blvd stop at 7:57pm.

Four minutes later, we were at the end of the line.

Four minutes is definitely enough time to play around with the costumes from the show though! 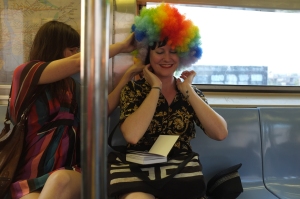 Flushing is a bustling Chinatown with lots of hidden gems of restaurants and bakeries and shops, I’m sure. 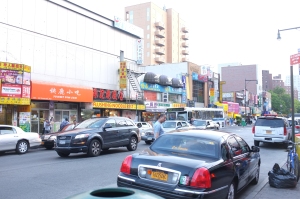 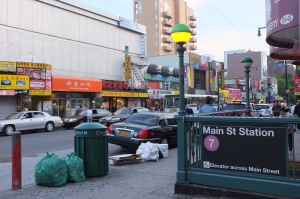 I spent a year out in suburbs beyond Flushing teaching a middle school theater program but had only eaten out there twice. Casandra and I had actually been in that neighborhood just two days before to take a trip to SpaCastle after our students did their in-school performance on Friday. So we had our bearings about the neighborhood a bit better than other neighborhoods we’ve landed in. But we still had to find a new place to dine. Fun Lounge, anyone?

Casandra and I had started the day with hangovers, and after our exhausting tech rehearsal and performance, we didn’t feel the need to venture too far from the stop. We didn’t really have to, though, because there are about a gazillion little places that appealed to us. We ended up at a row of restaurants on Prince Street (one of which I’m PRETTY sure I ate at after my Flushing students performed a couple years ago). We let Casandra make the selection and she skipped over the Chinese options and went straight to a Vietnamese restaurant called “Pho.” Her exact words were, “Mmmmm… broth…” 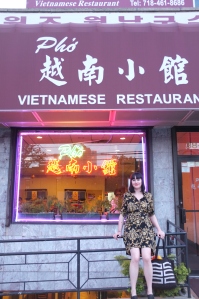 The restaurant was well-lit with friendly fluorescents and there were a couple other tables of diners giving a preview of the deliciousness in store for us. It was quiet—no music playing—but the silence was comfortable.

We chose a few things off the menu (Casandra got her broth) and we again let our server choose an appetizer for us.

-Shrimp Summer Rolls (which actually had shredded pork in them. Delicious for me! But Tania had to pull those pieces out for her)

-Shrimp with lemongrass over rice (Obsessed with Lemongrass lately, for real)

And our server’s choice… Chicken Satay. Funny enough, we almost ordered that ourselves. The same thing happened at the Lebanese restaurant in Bay Ridge when we almost ordered the spinach pie and then that ended up being our server’s choice. Nice, safe choice there. I’m still kind of waiting for a server to choose something really weird involving brains or eyeballs or something. Though I know that will be all up to me to consume. Tania will hopefully enjoy watching.

Tania ordered a Vietnamese Iced Coffee and Casandra, a Thai Iced Tea. I stuck with water. We were sort of thankful not to find booze on the menu because we probably would not have resisted the temptation and my liver was pretty angry with me that day. Though I did see boxes of Tsingtao when I went back to the bathroom. A cold one could have been a nice accompaniment to our end of the weekend, end of the line dining meal but alas. Restraint. 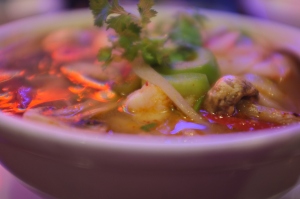 I loaded our fish ball soup up with Sriracha to boost the flavor but otherwise everything was very balanced with spice and pizzazz. We stuffed ourselves to the gills. Cass and I had eaten pizza with our students at the theater just a couple hours before (Remember the hangovers and wrangling of tiny people? Pizza was a necessity) but there was still enough room for a Vietnamese feast.

And feast we did. 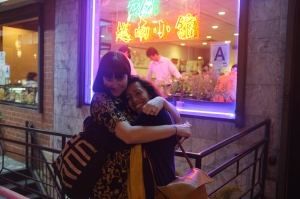 In fact, my ten years in New York have been a feast as well. A series of individual moments that I’ve devoured. I’ve filled myself up with experiences that have made me love and live in ways I never thought possible. I dug up a poem I wrote right before I moved. This is what I gave to all my friends as a parting gift and I’d like to share it with our End of the Line readers here:

the city that loves me
by bonnie pipkin, 2003

Tonight I’m drunk in San Francisco and tomorrow I’ll be hung over without you
maybe you’ll find me asleep on your bathroom floor, or maybe you’ll find me in your bed
hitting snooze over and over
with reluctance that is our every morning when last night was that good
This morning will not be much different
Sometimes I think I’m in love, San Francisco and sometimes I’m just drunk.
You gave me callused fingers, love handles and the taste of bile in my throat, hangovers and greasy breakfasts, kisses and pisses in alleys, bathrooms, and sweaty dance floors
nighttime was a gift you gave to me San Francisco
I screamed your name into the rain wrote it with a stick in the sand and watched the ocean eat it
I eat was eaten
I love was loved
Sometimes I think I’m in love, San Francisco and wonder if it’s just the weather
You gave me sunscreen and boys with wet kisses dry mouthed
The pigeons are fucked, it’s sixty-two degrees and my thigh hurts from your hipbone
I loved you San Francisco when you wiped blood from my nose, when the streets were foggy wet
and you gave me something to dance to, press against
laughing turning into laughing
When I sat on that bench on that hill overlooking the city with skinned elbows and knuckles and
forties of bud, I truly felt happy. I counted seventeen stars and wished on the first one to love and to be loved
I left red lipstick on glasses, cigarettes, collars and sleeves
your hand with the fading stamp
You gave me a song, a wedding ring, long walks,
late night declarations
we swung and sung and sometimes it felt so strong I never thought we’d all leave each other
but we do and we still will
And we’ll remember laughing and staring through the fog, empty bottles, ripped clothing, sore throats,
powdered sugar lips
lying in the grass on those few sunny days
that drove everyone wild
you gave me something San Francisco, and even when I leave there will still remain a piece of this messy heart on your streets, in the wind trapped between buildings
on your hands

Here’s to decades of moments and exploring all the nooks and crannies. To walking with my head and heart open to new magical moments. To letting it all fill us up and make us who we are. 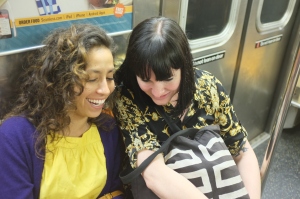