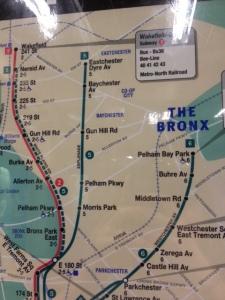 5 is for: High Fives, Stayin’ Alive

Last Wednesday, Tania and I rode the 5 train all the way up to Eastchester-Dyre in the Bronx. Couldn’t escape the irony in the name Dyre. Dire. What were we heading into? A few hours before the trip, Tania texted: We could always do the shuttle to Times Square. To which I responded: Nah. Let’s go for it. We don’t want all the shitty ones at the end.

I guess we have some balls heading up to Eastchester-Dyre at sundown. We know that this project is going to lead us to some dire straits, but one of our goals is to keep our heads up and our eyes open, and to reach the far corners of our city. What business do I have even calling this stop a shitty one? How do I even know? We’ve stood out in a neighborhood on more than one occasion. More than once, we’ve been asked: What are you doing here? Always with the same questioning faces when we say we just randomly took the train out there. But how do you end up anywhere, really? Sometimes you just have to let faith be your guide. 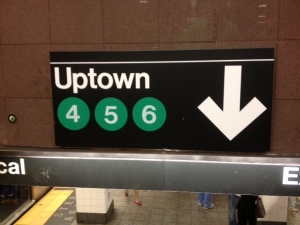 So, post-trip on the 5 train, I give you 5 morsels of End of the Line Dining wisdom learned and/or reinforced: 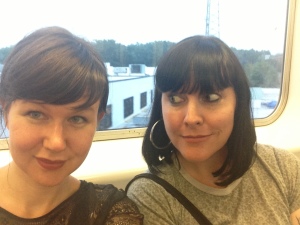 We boarded the 5 Train Uptown from Grand Central at 6:23pm. Mercifully, this is an express train. In the middle of some chit chat and catch-up, we were interrupted by a sudden call of, “Excuse me, ladies and gentlemen…” We, riders of the NYC transit system, are used to this—“What time is it? SHOW TIME!” Or kids selling candy. Or mariachi bands. This man didn’t look particularly homeless. He seemed to be in very good shape, and by this I mean he was ripped. Something about his voice captured us all. The mood on the train shifted. Instead of an annoying interruption, the vibe was that the riders were actually listening. I know I was. First he informed us that he just got “off the rock.” I thought to myself, damn, he looks good for a crackhead. But Tania informed me later that the rock he was referring to wasn’t the crack rock but Riker’s Island. Oh, right.

He went on to tell us about a guy he met in the shelter. Someone that kept saying over and over: God is good, God is good. He said to the guy: Say that one more time and I’ll help you out with a blessing. The man said again: God is good. So even though this man didn’t have much, he gave the other man what he could. He said to us all that you have to look out for people even if you don’t got much, and the blessing will come back. I’m not kidding, I never saw so many people give money to someone that didn’t just flail around on the bars to hip hop, or walk down the aisle with a serious disfigurement. 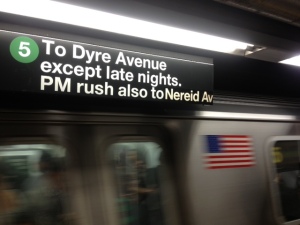 Tania and I knew this speech was going to have some significance on our journey ahead. And the whole journey did end up being about faith. 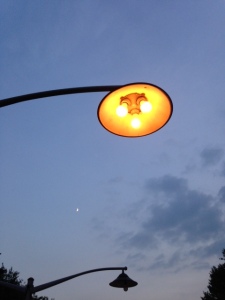 We arrived in Eastchester-Dyre at 7:09pm. Dusk. The sky was that purple-blue that I love so much. The first thing Tania saw from the window of the elevated train was two people sitting on a cardboard box, smoking something (we guessed that this time it really was the rock, as in the crack rock). 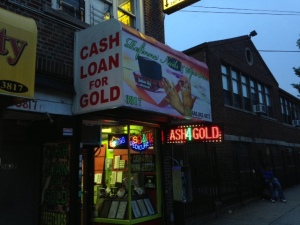 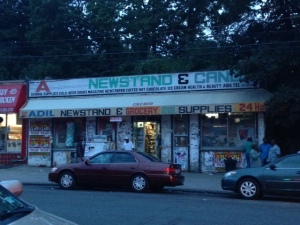 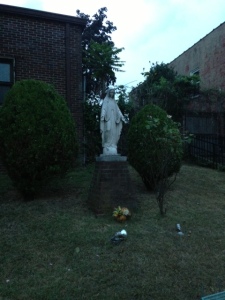 We were greeted by a row of commerce on the street directly out of the station (encouraging since that probably meant we wouldn’t have to wind too far in). And the first intersection that I saw was the corner of Light and Dyre. 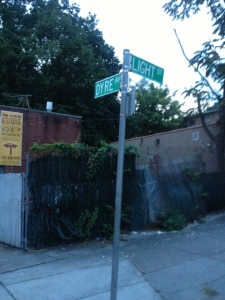 Call me crazy, but I took this as a very good sign. Where the light meets the dire. I felt hopeful that we would find something great. So we ventured down Dyre, and we almost settled for pizza, but then saw a sign for “Faithy’s Kitchen.” 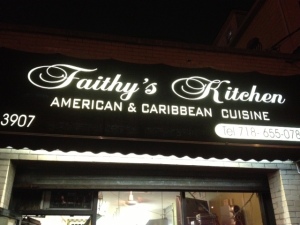 Miraculous! After what we’d just heard from our pal on the train, we knew this was our spot. 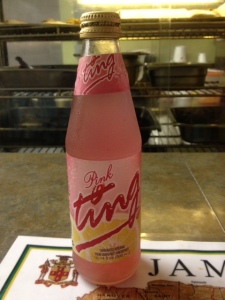 Faithy’s Kitchen is a down-home kind of spot. The majority of the restaurant is the kitchen, and the only seating is a counter top with five stools. 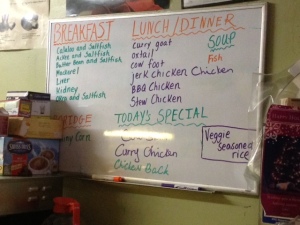 The menu is written on a white board, and Faithy, herself, is cooking and serving all of her guests. 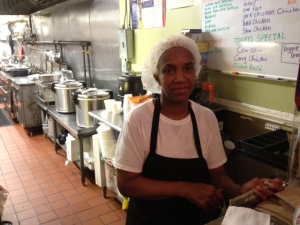 The Mets game was on the television. And when we arrived, the people in the restaurant hung out with the ease of being at home. Home in Faithy’s Kitchen.

Perusing the beverages, we found that Faithy makes her own juice. Tania grabbed a pineapple-ginger and then got excited by Pink Ting. Tania used to take vacations with her mom to Jamaica so she had heard of Ting soda. I, on the other hand, had not, so I grabbed one to try for myself.

She ordered a whole snapper with vegetable seasoned rice, and I ordered the chicken curry special with regular seasoned rice. Faithy filled Styrofoam containers with our meal, adding cabbage and vegetables on the side, and we sat down at the counter to eat. YUM! YUM! Double YUM! Faithy can cook! My chicken was tender and flavorful. The fish was the same. 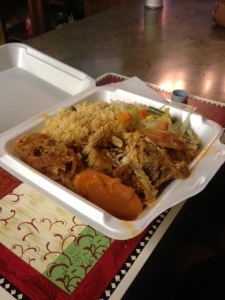 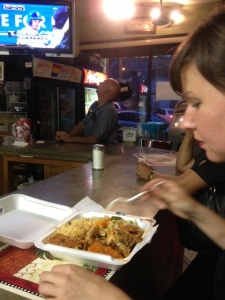 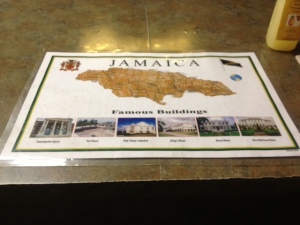 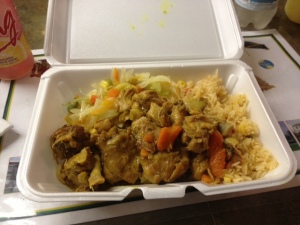 We mostly ate in silence. Soaking it all in, perhaps, and also we were just really freakin’ hungry. Ting soda is grapefruit flavored, and oh so delicious. If you ever have the option, try it! 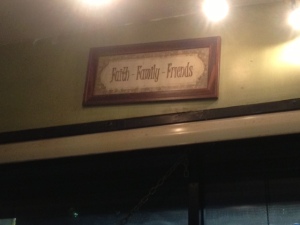 When we finished our meal and were leaving the establishment, a group of patrons were hanging out outside, and they all gave us the most heartfelt: “Come on back now, ya hear.” And then of course, that old familiar question came up of what we were doing in the neighborhood. If we were visiting from somewhere, etc. I responded that we were visiting from Brooklyn. Then came more heartfelt replies saying that whenever we’re back in the Bronx that we ought to pop on by.

So to this I say: there are good people everywhere. You just can’t go into a situation expecting the worst. This is age old wisdom, and how I try to live my life. We made it out of Faithy’s filled up solidly by delicious home cooking and the goodness of people. Even if you feel slightly out of place, just push on through and sit down for a meal. Chances are that you really are welcome. 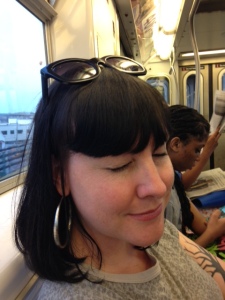 Our journey started with the outpouring of the man on the train’s faith and then we followed our faith into Faithy’s Kitchen. Back on the train downtown, a woman passed us a flyer to attend her church. You gotta believe in something is what I think. Even if it’s not God. 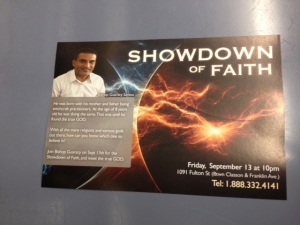 I, personally, believe in love. And I think love is much beyond what we can understand physically; it’s something that is spiritual to me. Not just love of one other person, but the love that I feel for my friends and my family, and even for the man that professed his faith on the train. I also believe in the goodness of people. Sure, that means I get burned from time to time, but that is something that I must believe in. That’s faith to me. Faith can be as simple as making someone else’s bed if they let you sleep in a little longer, or singing a song at the top of your lungs, or knowing there’s someone to call when you’re feeling blue, or giving someone a dollar that needs it, or just saying thanks for stopping by. Faith is a powerful thing. 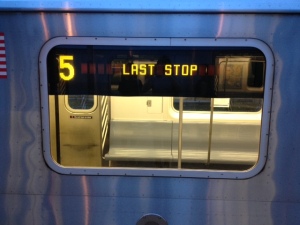