M is for: Makin’ our own Luck 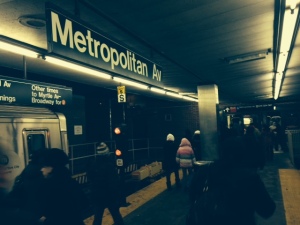 On December 1st, Tania and I rode the M train to Metropolitan Avenue, in Middle Village, Queens. I have a long standing tradition to declare “Rabbit Rabbit” on the 1st to ensure good luck for the month. My brother, Steven, and I have a near twenty-five year long competition going that whoever says it first gets the luck for the month. We used to take this so seriously when we lived together that we would find a hiding spot in the dark, just before the clock turned over to midnight, and then try to catch the other off guard with a Rabbit Rabbit sneak attack. With good luck at stake, it was very important to say it first! Our screams of bloody murder would often wake our poor parents up with the fear that their dear children were being taken hostage or something. Either that or they were just annoyed that we woke them up AGAIN. 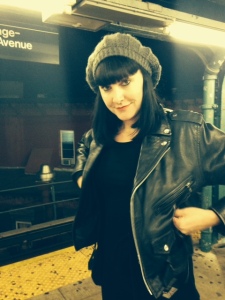 In general, I feel very lucky. There’s a lot of goodness in my life. A lot of love and fun and support and opportunity.  Recently though, I’ve been nursing a broken heart, which can pretty much make you feel like your luck has run out. I abandoned yoga for a little while and replaced it with cigarettes and booze. Poison, instead of breath. I don’t know how anyone ever gets through a breakup without cigarettes, but that’s just me.

Tania and I wanted to pick a low-key destination this time around. Drained heart (yeah), drained brain (as I finish up my last semester of grad school).

Tania has an amazing talent for shape-shifting into the exact mood that you need her to be in. If you’re up for a wild night, she is a most excellent companion. If you’re feeling droopy, with a heavy heart, she’s also your gal. If you want a low-key adventure to the end of the line, she will follow suit and then fill it up with her charms and insights, making you sing Christmas carols even when you don’t want to, and suggesting Root Beer for dessert when they’re out of tiramisu. Tania is my sister. Truly, deeply. She lays down the law when it needs to be laid down, offers some of the most sensitive yet still strangely logical advice, and is my favorite person to share a bottle of wine with or some silly bathroom humor. I’m very lucky to have her.

Our trip to Middle Village was efficient. The ride from Myrtle-Wyckoff was nine minutes long. We tromped down Metropolitan Avenue just after the sun had completely tucked away, with a giant, looming shopping center on one side of the street and an expansive cemetery on the other. Middle Village definitely does not feel like New York City. Lots of strip malls. Because of this, we were sort of thinking it was may be time to hit up a Hooters or a Chili’s or something like that (NOT Applebee’s though, Tania hates Applebee’s). But we didn’t find any such place. Instead we found this cute little junk shop. 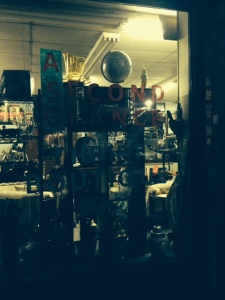 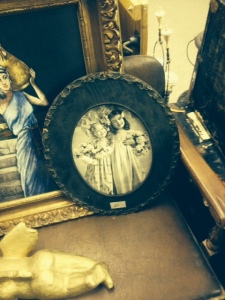 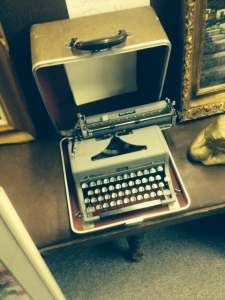 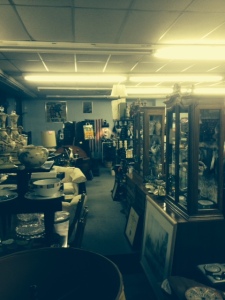 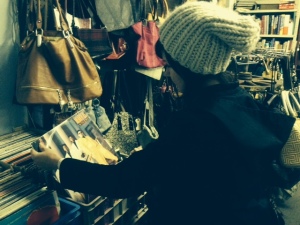 We asked the employees where to eat, and they said Rosa’s without hesitation. And to definitely “get the Sicilian.”

So, right around the corner, on Fresh Pond Road, was the neighborhood hotspot, Rosa’s. Where the Queens locals get their Sunday supper. We were seated next to a table of plain clothes officers, with badges and guns hanging from their belts. Families and couples. Casual. Warm. Friendly service. Low-key. And just what we needed.

We ordered the shrimp parmesan with penne pasta and a grandma slice to share (Sicilian style). Tania got a small bottle of very cold Merlot, and I got a beer. The bread came even before the water (which was in paper cups from a pupuseria… perhaps they went out of business and gave all their cups to Rosa’s?)

The food tasted exactly like it should. Italian comfort food. Nothing mind-blowing but certainly delicious. We ate fast. With efficiency. 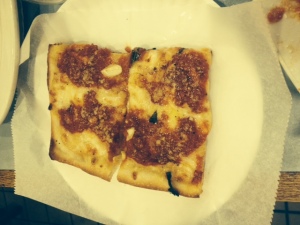 On the way back to the train, Tania bought a wreath declaring that she “needs a little Christmas, right this very minute.”

This is her current favorite carol. Some of the lyrics are kind of dark:

Actually the whole song is about saving someone that’s kind of sad and lonely with the holiday spirit. I just peeped at the lyrics again, looking for a more cheerful verse, but look at this:

Haul out the holly
Put up the tree before my spirit falls again
Fill up the stocking
I may be rushing things, but deck the halls again now

The holiday season can feel really lonely, I suppose. I like that this song is being real about that. 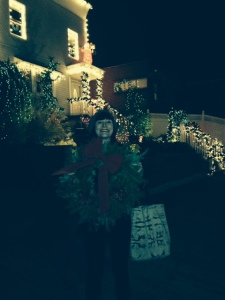 On the way back, we also tried to find Funtopia inside the strip mall, but the entrance system was too confusing and we couldn’t find it. I’ll try not to see that as a metaphor. Haha.

We did find some quarter machines which we’re both suckers for. 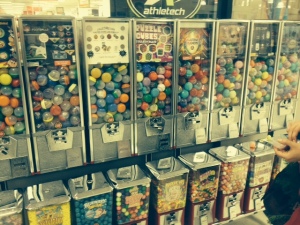 What’s Tania so excited about in that picture?

Maybe this post is a little more melancholy than my other hopelessly romantic musings. Blame it on the season. Maybe I need a little Christmas. Maybe I need the luck from Rabbit Rabbit. Maybe I need my friends. Maybe I just need to power through and stay focused on my work until I can just go chill out for a few days in California. 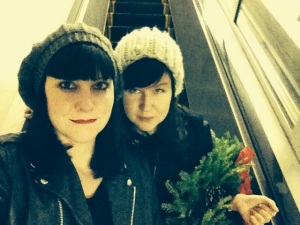 Middle Village is called such because it’s the midpoint between Williamsburg and Jamaica. While this wasn’t a balls-out adventure like our Brighton Beach trip, it was this comfortable middle place. A place between where we were and where we want to be. I’m working on moving forward. I’m so incredibly proud that I’m almost through with my MFA degree. I am so incredibly thankful for all the good people in my life. Luck is a funny thing. I make wishes when the clock has all the same numbers on it, I lift my feet when driving over a railroad track, I declare Rabbit Rabbit on the first of the month. But in general, I just try to live my life as awesomely and honestly as possible. And I think that’s where the real luck comes from. 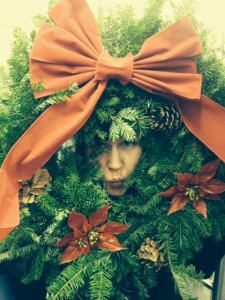