Hello! Did you lose faith you’d ever see another post from us? Did you think that maybe we wouldn’t finish what we started? That we’d fallen OFF THE RAILS? Fear not! The Box Car girls are back with another adventure. We have a tale to tell of shopping madness, a weird underground food court, and a nostalgic chain restaurant….

Tania and I wanted to ease back into things since we’d really dropped the ball on EOLD as of late. We missed spring and most of winter (do you blame us? It was a cold one!). Tania also gets insanely busy with work in the spring, and I was busy juggling my multitude of jobs and projects. [Check-in! Since we last spoke: I’ve begun teaching at a community college, I’ve produced an original play at a Brooklyn high school with Mary and teenagers, I’ve watched 156 episodes of Friends (maybe that’s why I haven’t finished my novel revision), and that boyfriend who I may have mentioned, moved in with me. Holy pile-up, Batman!]

So, when I suggested Jamaica, Tania didn’t want to deal. It didn’t seem ease-back-in-worthy. After all, when you haven’t run in awhile, you don’t jump back in with a half-marathon, am I right? Our first impression of Jamaica was not favorable. But I needed to pick up a paycheck at Plaza College (that new job) off the E train line, so we just went ahead and killed two birds with one stone. Easy enough

I met up with Tania at Union Square. I was admittedly a little tipsy since I had been catching some rays by the Hudson with a Lemonade-Rita, while killing time before meeting up (when did I become such a lightweight?).

The buzz wore off during the ride. Not that my company was a buzz-kill or anything! But one Lemon-rita does not make for a full afternoon.

The Jamaica at the end of the E train was much different than what we saw at the end of the F line. On the contrary, the end of the E was a bargain shopper’s paradise! Every one of those cheap clothing stores we secretly love (Rainbow, Mandee, Strawberry, you know what I’m talking about) was out there and surrounded by many new gems of cheap clothing I can’t resist. I had an event coming up that I needed an all-white outfit for, so we had our eyes peeled. 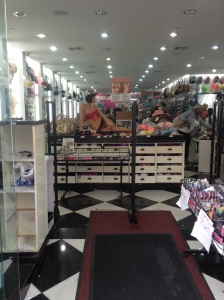 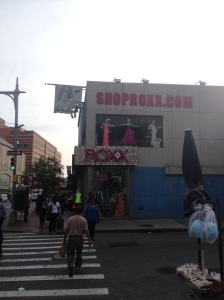 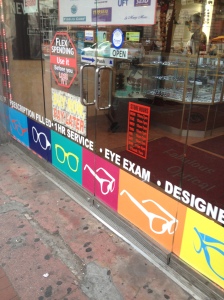 In the end though, the only person who made any purchases was Tania. But I’d say she scored with a white mesh and ribbing cape contraption thing. When she stepped out of the dressing room, another shopper told her she looked high fashion. Like she could be in the magazines. Unfortunately, there is no photographic evidence of this score.

The strangest part about this shopping mecca though? No restaurants! I don’t know about you, but I always get hungry when I shop. I actually think I’m just always hungry, to be honest. But nothing gets me quite as hungry as riding a train to the end of the line, and trying on tulle skirts and white denim.

Where, oh where, are the restaurants in Jamaica?

Both of our phones had died by the time we found a basement food court. I so wish that we could have captured what this dimly-lit twilight zone was like, with its fading fluorescents casting a greenish glow against brown tile, and lethargic, zombie-like workers. The food options were Chinese, Japanese, and maybe a burger? A few lonely souls sat, eating out of Styrofoam containers. The stores nearby were half-filled, like a liquidation sale had happened and was later abandoned. There were jewelers, a very old shoe repair man, and formal wear fit for any event in the 1980s.  We had seriously stepped back in time (especially with the absence of cell phones). But we had also maybe stepped onto the set of a zombie apocalypse movie. Or maybe it wasn’t a movie set? Yikes! I’m glad we got out of there alive!

At that point, we remembered we had passed an Applebee’s right off the train. We decided to head back in that direction and make a concerted effort to find something else along the way, but if we found nothing, we’d check out the Jamaica Applebee’s. And I’m sorry, but those Caribbean buffets we seem to spy at all the end-of-the-lines never look appetizing. We do make an effort to find something unique and off the beaten track, but we know there will be occasions where we have to hit a chain. And look how it welcomed us back!

Applebee’s is a restaurant of my youth. I remember when the first one came to Chico, California. I even remember the jingle that was always on TV (Pass the pasta! Pass the pasta! Pass the pasta, please. Pass the paaaaaastaaaaaaa. The pasta at Applebee’s! America’s favorite neighbor! Applebee’s!) (Or wait, was it America’s favorite flavor? I’m second guessing myself). Applebee’s was the SPOT for the Pipkins. I always love the big crazy salads at places like that with, like, breaded chicken and tortilla chips and ranch dressing. I have a soft spot in my heart for chain restaurants like Applebee’s or Olive Garden or Chili’s. It’s just true. I used to rebel, but now I reminisce. With a giant cocktail in a souvenir glass in my hand, that is. 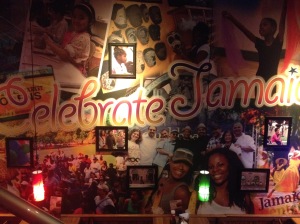 Speaking of cocktails, we were both ready to Celebrate Jamaica, and get the buzz back on. Off the bat, I ordered a Bass Ale, and Tania got a margarita. I plugged my phone in to charge, so we could grab these shots of our food and our quintessential across-the-table shot.

Here’s what we ate… 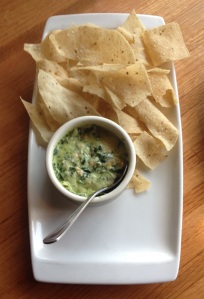 It was as mediocre as one could expect. Why did this food taste so good in Chico? I think chain restaurants taste worse in New York and better in small towns. Do you agree? I really think that’s true. But why? I think I need to conduct a study. The first time I ever had lobster was at a Red Lobster (with Tania) in a small town outside of San Francisco. It tasted great. But I’d be willing to bet a lot of money that the Red Lobster in Times Square is disgusting. And expensive. Anyone want to test this theory with me? It will require some road trips and some chain restaurant eating. Next food adventure project? The Suburban Chain Gang? (thanks, Tessa, for that brilliant title idea).

Anyway, I’m glad to be back on the rails. I feel free again. Nothing like the stop and go of a subway car as we chug along to the last stop. Nothing like hearing “Stand Clear of the Closing Doors” as many times as we do to get to the end, with the hope of some secret pocket of food. We didn’t find the secret spot in Jamaica. Not saying it doesn’t exist. And we still have to go there a few more times for a few more end-of-the-lines, so we’ll be reporting back.

Until then, eat well, and avoid the chains in NYC. We’ll see you again soon. Promise.