C is for Clarity
Crafted by: Bonnie

I love the Fall. To me, it not only means I like my wardrobe better (flannels, boots, leather, layers, yes please), but that I buckle down and focus. Growing up in California, I was never as attached to the seasons as I’ve grown to be in my twelve years in New York. I had no concept of what it meant to survive a season. Even though I hate to sweat and my skin is as sensitive to the sun as a baby’s, I need the summer to let loose and be free. But it gets hard. The hangovers, the chafing, the weird heat rashes? When the season turns, I’m ready for productivity. Much as spring is the reward for surviving winter, fall is the red, orange and yellow garland around this horse’s neck. The prize. I feel my best in the fall.

So it goes without saying that Tania and I decided it’s time to kick End of the Line Dining back in gear. Focus. Clarity. No more excuses. No more starting the posts with It’s been so long since we’ve written…

The plan was to meet on the Downtown A platform and roll the dice- Far Rockaway or Lefferts Blvd (this train has two end points). We’d get on whichever arrived first. Lady Luck had a different idea for us though. A trains were not running all the way to the end of the line, so we improvised and hopped on the C to Euclid.

Thirty-five minutes later (express stops are our friend), we arrived at Euclid aaaaand…. 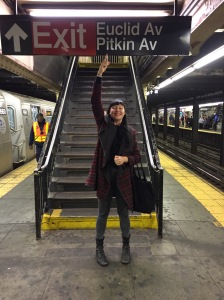 Pitkin! Hey, that’s almost my name! Side note: when I was in kindergarten, I had a friend named Chrissy Pitkin. It was… confusing. Pitkin, Pipkin. What’s in a name?

So we found ourselves in East New York. Not exactly how we thought we’d spend our Sunday afternoon, but we are open minded. As end-of-the-line diners, we are accustomed to being swept up in the (autumn) breeze. 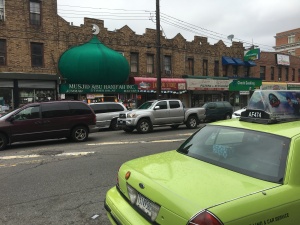 Have you been to East New York? I know you’ve driven through on your way to the beach, but many of us don’t have a reason to stay. From what I understand, East New York gives us a pretty good idea of what the parts of Brooklyn that are now full of condos and juice bars and boutique toy stores, used to be. It gives us an idea of why no one rode the L train even to Bedford, and no one went past Avenue A in the East Village. It certainly isn’t common to see two white girls strolling through and taking pictures of the architecture and community gardens.

Our intention is never to exploit or objectify though. We do all this in earnest. Because we love the city, every corner of it. We seek the road less traveled. And then maybe we find this:  Help Us written in blood. But fear not! It’s not East New York that’s so scary, but Halloween!

Which gave Tania the idea that perhaps the discount and 99 cent stores would be much more affordable out here for decorations than in Williamsburg. So now we had a mission. Lunch, yes. Observations, yes. But also, Halloween decorations.

Not finding much by way of 99 cent stores OR lunch along Pitkin (a sketchy pizza joint seemed a better option than the Chinese with the plexiglass shield between the kitchen and customer but still), we trudged forth.

We almost settled for Burger King (we probably will at some point) (and the Oreo shake advertised in the window looked delicious!), but then Tania recognized the area as where she would come meet her little sister when she was part of the Big Sister program. She knew there was a vibrant pocket somewhere close. So we went on.

This half-and-half lion was pretty cool: 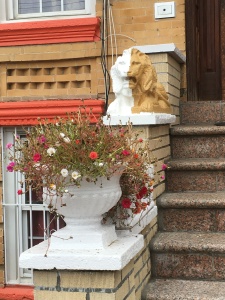 We made our way to Liberty Ave, and to one of my favorite discount department stores! Was this the original? Liberty on Liberty? And would they have Halloween decorations???

It seems Liberty was getting a jump start on Christmas instead. So our mission was not yet accomplished. That’s okay. We’d only just begun. Rounding the bend, we spotted a store with some spooky spangle outside, including these vintage looking masks.

The guy behind me kept a close watch on our activities.

His masks were cool, but the rest of the loot was limited. A little further down the road however, we hit the jackpot.

Tania was right. Very reasonably priced. I totally got that jack-o-lantern tote for a dollar, not to mention some iron on patches to fix my favorite black jeans, also one dollar. Tania got that ghoul and the spider webs and that googly-eyed mask in the lower left and so much more!

Is this mask Michael Jackson? It didn’t say! 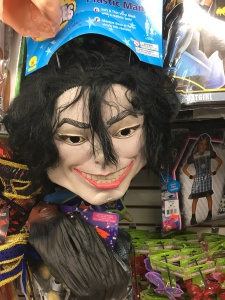 Now with one mission accomplished, the next goal was food.

Had we settled for whoppers and fries, we never would have discovered Grant Caffe on Liberty Ave. A far better option, and the neighborhood agreed, for it kept a steady flow of customers our entire meal.

Tania and I do love a diner. There have been more than one on our End of the Line adventures. 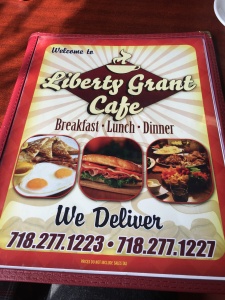 And Tania faced her usual dilemma: sweet or savory… sweet or savory… Will waffles with strawberries and bananas be as satisfying as a mushroom omelet or a veggie burger and onion rings? The eternal question when ordering brunch, am I right? 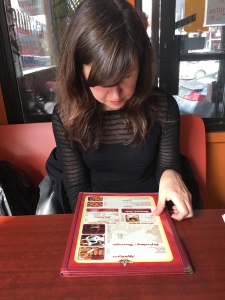 Hmmmmm… corned beef hash. You know? I’ve never had corned beef before. Not because I’m opposed, I’ve just never had the occasion. Is now the time?

Certainly coffee is in order.

I did it. I went for the corned beef hash with hollandaise. When opportunity strikes, I swing away…

And waffles for the win!

She looks excited, no?

I look like I just shoved some hash browns in my face before I realized Tania was going to take a picture.

What did I see? Well, if you must know, this bangin’ leopard print skirt for one dollar! We must go!

Then we walked toward the J train home, since it doesn’t matter how we return.

We spotted some inspirational graffiti.

And found some reassurance.

And after winding back around home… 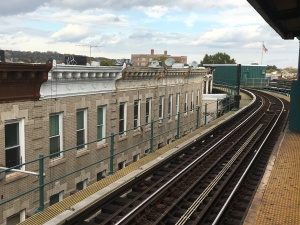 Tania did this to her apartment!

Happy Halloween! May the season bring you clarity and focus, apples and pumpkin spice, and all the space to dream and do.